Find out more about Bourgeois in our panel discussion with Alice Blackhurst (Centre for Film and Screen), Alyce Mahon (History of Art) and Juliet Mitchell (Psychoanalysis and Gender Studies).

Followed by a glass of wine

Louise Bourgeois (1911–2010) was born in Paris and lived and worked in New York from 1938. She is widely recognised as one of the most important figures of modern and contemporary art. Often biographical, Bourgeois’ work explores themes including childhood, family, motherhood and gender identity.

She engaged with existentialism and surrealism as a young artist in Paris – where she was also mentored by Joan Miró – and moved to New York in 1938. The importance of her work was not fully recognised until the 1970s, when her career was reinvigorated by a new generation of women artists. 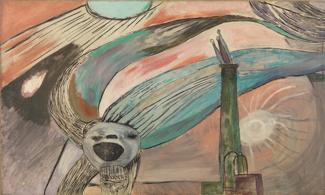 The selection of work at Kettle’s Yard includes sculptures, prints and drawings, reflecting different periods in Bourgeois’ life, and is drawn from the ARTIST ROOMS collection.