A temporary display at the University Museum of Zoology highlights historical depictions of both exotic and more familiar animals.

The books will be on display on the Museum’s Mezzanine until May 2019.

Please be aware that the Mezzanine does not have step-free access.

A new temporary display at the University Museum of Zoology highlights historical depictions of both exotic and more familiar animals.

The ten books are on loan from the Department of Zoology’s Balfour and Newton Libraries here at the University of Cambridge, and each is open at a stunning illustration of one of the animals they describe.

Among the collection are some of the most important texts in the history of natural history. For example, Georges Louis Buffon (1707–1788) was one of the most prominent scientists of eighteenth century France, and his multi-volume Histoire naturelle [‘Natural history’], published throughout the mid-1700s, attempted to bring together all the knowledge on the natural sciences at the time.

Buffon put animals into groups which shared particular characteristics, and described loose relationships between these groups. In Buffon’s classification, some species bridged the gap between classes (for example bats bridge the gap between four-legged animals and birds; apes bridge the gap between four-legged animals and humans). His system incorrectly had humans at nature’s central pinnacle, and he structured the Histoire naturellein order to reflect humanity’s relationship with animals, dealing first of all with domestic animals. 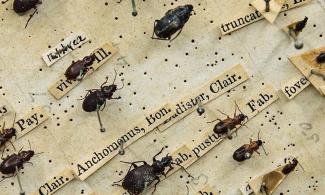 Take a tour around the Museum of Zoology and see specimen collected by Charles Darwin.